Trailer for Book 3 of 3, in the ‘Ballad of John Rizzerio’

To be fair, this image was taken ‘outside’ the Local Author Fair.

It was everything I expected it to be, and it was not.  My first booth was stationed just inside the entrance to the library.

I was originally going to share my table with another author, but due to the weather, she wasn’t able to make it.

The check-in time was between 1-2pm, and having arrived exactly halfway between those times, the hour and a half wait was excruciating.  I’m thankful that my wife was able to attend the event with me.  Not only was the small-talk nice, but she got a chance to see the world that I have become a part of.

Even though there were a handful of tables just inside the circular entrance of the library, we were the last authors seen as people moved into the main section of the library itself.  (From where I’m seated and to my right.)

Reactions were mixed.  My first visitor was a devout Christian from a local Baptist Church.  Drawn to my table by the graphic cover of my novella, he quickly began to question me; first about my book and then about my faith.

I immediately sensed that he wasn’t interested in my book.  Even though I described the synopsis, the protagonist and the reason for the stigmatic Jesus on the cover, he was more interested in my soul than in my work.  The more I talked about my book, the less he listened until finally, I answered the one question I had been avoiding, (which he asked each time after “What’s it about?”) Whether or not he was satisfied by the answer, he beat a hasty retreat and I only saw him from afar for the rest of the evening.

For the next hour, and until the 3pm start time, I passed out many business cards but not a single book.

Now, I should mention that there was also a Novice Writers Forum which was offered to a limited number of people.  A small handful of Best Selling Authors spoke before a small group of people about the publishing and marketing process of one’s book.

Unfortunately, I wasn’t able to attend this but I did get a chance to speak with a few authors, as well as those aspiring to be, as they exited the meeting.  One woman in particular stayed at my table for several minutes as she asked about my experiences as a self-published author and expressed her desires to do so with her own work.

I wish she would have shared her name with us while she was there.  I asked, but I’m not sure she heard me.

She was an elderly cancer survivor, writing as her energy allowed her to, who came to the Fair to speak with published authors and discover what she could about the finishing process.  She made her way around the library via electric wheelchair and when she spoke, you really had to make the effort to listen.  The natural acoustics of the building, combined with the dozens of people making their way through it, made it difficult to hear.

We spoke for ten minutes and after taking a card and leaving the promise to read some of my online work, she made her way to next table.

Next to me were two authors.

One, a Bob Fraught, was the first author I spoke to who was a part of the Fair itself.  This was also the first of two times that night that I showed just how nervous I was.

I had seen Bob and his wife arrive earlier that night, she even introduced herself as he was setting up their side of the table, but hadn’t paid very close attention as he was removing his coat and scarf.  As a result, when he came to my table, I inadvertently asked if he was part of the Fair as well.

“Yeah, dumbass, he’s right next to you,” says my inner voice as he confirms this in his own words.

But at least he remained friendly about it.  He asked about my work and also described his as well.  If you have a chance, click on his link and see if his work interests you!  It describes his journey through various major surgeries.  He’s a man with a SUPER positive outlook on life and one I’m happy to say I had the pleasure getting to know, even if my skills for observation were a bit off.

He returned to his chair when his table-buddy, Tad Pritchett, arrived and began to set up on his side, but more on him later.

It was 3pm, time for the show to begin!

The library was abuzz as people began to trickle in to support their favorite [local authors].  We three thought we were sure to see some major traffic at this time, but as they came through the main doors they turned and entered the hall where the majority of the authors were stationed.

And so the first hour came and went without so much a single person.  Bob and Tad stood off to the side visiting while my wife and I did the same at our table.  Because we were stationed across from the checkout counter, we did see many familiar faces as they were leaving, but they were there for the sole purpose of borrowing and not buying.

Eventually, an events coordinator came around and invited us into the main hall, where there were several open chairs from authors who had either left early or hadn’t arrived (also due to the weather), and soon we were part of the cool kids crowd. 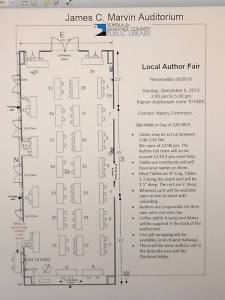 Okay.  I apologize if this isn’t easy to see.  Getting a clear picture uploaded to my computer wasn’t the easy task I envisioned it to be.

I soon found myself seated at table next to an ex-FBI agent; Mark Bouton, who was selling a number of books that day.  We exchanged pleasantries, as well as talked about our books for a bit, before settling in for the last half of the event.

There was a lot more activity during this hour than the first.  Of course there was!  We were just inside the door and a couple of tables in!  If you look at the first map, this new seating is in a hall off to the left of the round room in the Rotunda.  We were seated at the left end of table 27, Tad moved to table 26, while Bob and his wife had table 15 to themselves.

Okay, that might not be true.  Another author, Charles A. Silvestri, seemed to be pushing the books out faster than anyone else on our side of the room!

By this time, Mr. Tad Pritchett came by the table for a visit.  We talked a bit about our books, after which he expressed his interest in my own, despite his phobia of vampires, and mentioned that he would like to buy a copy.  He also expressed an interest in self-publishing and mentioned having some questions he would like to send to me, to which I more than happily agreed.

So it would come to be that Tad and I would exchange books.  By the time I was able to get my own copy a week later, he had already finished mine, and with some very complimentary words to boot!  We’ve since agreed to exchange reviews on each other’s work and I am happy to have had the chance to meet him.

The Local Author Fair was coming to an end.  The events coordinator made her rounds to each table, explaining that they were closing the hall soon and we began to pack our things together.  I had only sold one book, but I left with something much more meaningful.

From Tad, I have a book about the Battle of the Bulge, from the words of those who fought in that war.

From Bob I found that despite how much pain and suffering one can or must go through, there is always a silver lining.

And from Mark I received an offer to join in a local author’s group that meets regularly to discuss their current work and share samples of their writing.

No, I didn’t successfully share my book as much as I would have liked.  What I did was meet some wonderful people and gain some very lucrative opportunities.  And I say lucrative, because a writer can only stand to profit from an author’s group, as well as the open invitation to return to next year’s Local Author Fair, right?

Of course I can.

This review was written about a book signing I took part of on December 8th for my first book; The Rise and Fall of John Rizzerio.  Information about this novella can be found by clicking on the Dusty Tomes menu tab on my website.

WHAT:  The Rise and Fall of John Rizzerio

WHY:  I have been invited to participate in an event for local authors.

I first heard of this ‘Local Author Fair’ just a little under three weeks ago.  Frankly, I didn’t have very high hopes of being able to attend.  At the time it was brought to my attention, the library was already boasting over sixty authors in attendance!

But you never know if you don’t try, right?

It’s been my mantra for years and I definitely recommend giving it a try, because the truth is, you simply don’t.  You can’t know, and if you want something bad enough, you have to put yourself out there.

I’m about the most introverted person I know.  Digging up the courage to step forward with something I believe in isn’t always easy and rejection has been my biggest enemy for as long as I can remember.

While I am afraid to face this enemy, each time that I do I am able to stand taller on the other side of the encounter.  The thing about rejection, that I’ve learned, is that it is just a word.  “No.”  It can be a hurtful word, but no matter how it’s said, it doesn’t have the strength to take your chosen craft away from you.

I’ve had stories turned down by magazines.  I’ve also been given a negative (verbal) review of my work.  I’ve had time to look at things in retrospect and I’ve learned no matter what a few people might say, the majority still enjoy what I’m creating.

With this, I stood forward and contacted the hostess of the event. I had little hope that I would be able to attend the Local Author Fair, but I had to try.  When I received my first response, it seemed that my fears were going to be true.  She politely informed me that there were no more open spaces, but, if I left my information, I would be contacted with-in a couple weeks if an opening were to arise.

In my excitement I announced this on my social media, and why not?  Here was an event specially tailored for someone like myself.  Not only would I be surrounded my dozens of like-minded individuals, but there is also the potential for many more readers as well!

Those two weeks came and went, however, and I have remained quiet, patiently waiting for the word I was beginning to fear wouldn’t arrive.

“It was just too good to be true,” I thought.

But I couldn’t have been more wrong!  Late last night, the hostess contacted me and informed me of an opening, should I still want it.

And with that being said; I’d like to invite any and all readers in the area to participate.  If you are coming from afar, I hope you’ll stop by my table and get to know a little more about my story.  I look forward to seeing you there!

“Never give up, and above all else, try!  You might be surprised what happens when you do.”